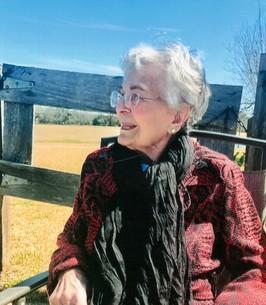 Julia Alberta Francis Williams, was born on March 25, 1923, in Margarettsville, NC. She died peacefully on Wednesday, June 15, 2022, surrounded by her family. She was 99 years old.
Alberta lived in Ethel, Louisiana, and was affectionately known by most as Momimee. Alberta moved to Miami, Florida, in 1940, where she worked at the Charles of the Ritz counter at Burdines Department Store. She met Marshall Ney Williams when he was stationed in Miami following the war. She loved to dance, and they were introduced on a blind date for a USO dance. They were married in Miami in 1947 and moved to Ethel, where they ran FS Williams Country Store and raised their four children. She was a devoted member of Ethel United Methodist Church.
Alberta was a bright light. Her eternal optimism, strength, love, and humor are an inspiration to her family and everyone who knew her.
Visitation will be on Saturday, June 18, 2022 from 4–8 p.m. and on Sunday, June 19, 2022 from 12:30–2 p.m. Funeral Service Sunday, June 19, 2022 at 2 p.m. all at Jackson United Methodist Church, 1727 Sycamore Street, Jackson, LA. Burial following the service at the Masonic Cemetery, Highway 10, Clinton, LA.
Alberta is survived by her Daughter in Law, and her children and grandchildren, Linda Williams of Ethel; Stacy Williams of San Francisco, CA; Jennifer Williams Templet and Eric of Ethel, Abigail and Emily Templet. Her daughter and her children and grandchildren, Judy Williams Hood and Jerry of New Orleans; Mike Hood of Carriere, MS; Mark Hood and Shannah of Mission Viejo, CA, Benjamin and Christopher Hood; Malcolm Hood and Agatha of Helsinki, FN. Her son and his children and grandchildren, Richard Williams and Samantha of Ponchatoula; Daniel Williams and Jessica of Baton Rouge, Tyler, Andrew, and Cate Williams; Amy Williams DeLee and Joshua of Jackson, Morgan and Hayden DeLee; Maddox Graham and Margaux Ellender; Jeremie Simmons of Ponchatoula and Brantley Simmons. Her son and his children and grandchildren, Raymond Williams and Nancy of Ethel; Lisa Williams Frosch and Joel of Zachary, Bradley and Anna Frosch; Jeffrey Williams and Brittany of Ethel, Parker, Payton, and Paxton Williams. She is also survived by numerous beloved nieces and nephews.
She was preceded in death by her parents, David Drewry Francis and Maude Cobb Francis, her husband Marshall Ney Williams, her sister Rebecca Francis Overby and her husband Henry, her brother David Francis and his wife Marion, her son Manship Williams, and her granddaughter Christa Simmons Champagne.
Pallbearers will be Chuck Beauchamp, Paul Cary, Stuart Cary, Joshua DeLee, Joel Frosch, Malcolm Hood, Jack Jones, Eric Templet, Daniel Williams and Jeffrey Williams. Honorary Pallbearers will be David Francis, Jerry Hood, Albert Overby, Lee Neal Williams, Thomas Williams, her grandchildren, and great-grandchildren.
A special thank you to all of her wonderful companion caregivers over the last few years.
In lieu of flowers, please consider a memorial donation to the Ethel United Methodist Church, (PO Box 182, Ethel LA 70730) or your favorite charity.
Farewell, our beloved Momimee.