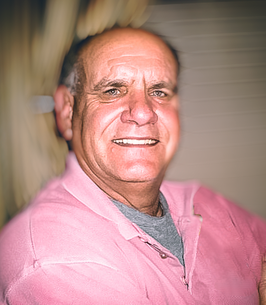 John Dickinson was born October 23, 1944 in Morganza, LA to Linda Leblanc Dickinson and Allie L. Dickinson. He left us for a better place on June 9, 2022 after being ill for several months. He grew up in Baton Rouge on Lorraine Street and attended St. Gerard Elementary and Redemptorist High School. He was a member of the RHS class of 1962. He earned BA (1967) and MA (1972) degrees in Journalism from LSU. He met Dot Daniel in the summer of 1966 when she was just out of high school and he was a college senior. They married in 1968 and their union produced two beautiful children, Greg and Gretchen.

John graduated from LSU during the Viet Nam War and was drafted but didn’t pass the physical because of his polio legs. He accepted a job at Exxon, as it was considered a defense plant at the time and worked there until his retirement at age 55. He sold real estate for a while but gave that up because of the stressful competitive nature of the work. He wanted to relax in retirement and enjoy his home and family.

He was a loving and encouraging husband to Dot, a supportive parent to Gretchen and Greg, and an adoring Paw Paw to his Sweet Olive and Precious Pearly Whirly. He was so proud of the accomplishments of his loved ones, and they brought him great joy. His sister, Donna, was so special to him. Eight years her senior, he respected and treasured her beyond measure. He hid his health issues but was probably sick longer than the last couple of months before he went to be with Jesus.

He avoided the spotlight and never wanted to be the center of attention. If you were lucky enough to be his friend, he was fiercely loyal to you. He tried to make others feel special and had a way of making people smile.

He is preceded in death by his parents Linda Marie LeBlanc Dickinson and Allie Dickinson; in-laws Elise and Maxwell Daniel, Sr.; and his sweet dog Dexter.

Services include visitation Thursday, June 16, 2022, at St. John the Baptist Catholic Church, 4826 Main Street, Zachary, LA at 10:00 am until the Funeral Mass at Noon. Mass will be concelebrated by Fr. M. Jeffery Bayhi and Fr. Lamar Partin. John will be cremated and inurned at a private ceremony at a later date.

In lieu of flowers, please consider a donation to St. John the Baptist Catholic Church Debt Reduction Fund, or a memorial mass in John’s name. Both options can be arranged by contacting the Church Office, 4727 McHugh Drive, Zachary, LA 70791. 225 654 5778

Charlet Funeral Home is in charge of arrangements. John’s family sends sincere thanks for the many kindnesses shown in this difficult time.