To share your memory on the wall of Jason Fendlason, sign in using one of the following options:

Print
Due to inclement weather on Tueday, Funeral has been rescheudled for Friday, Feb. 19, 2021.

Jason Daniel Fendlason, III (83 years old) of Zachary, Louisiana died on February 13, 2021 in Baton Rouge, Louisiana. This old roadie just wore slap out. He had hundreds of thousands of miles on him & they just don’t make spare parts for 1937 models anymore. He was born on August 9, 1937 in Baton Rouge, Louisiana to Jason Daniel Fendlason II and Evelyn Ford. He grew up in the golden years of Downtown Baton Rouge and the city was his playground. He told stories of riding his bike around the city and riding the train. He was a graduate of Baton Rouge High and was a member of the band, where he played baritone. After graduation in 1956, he and his middle school sweetheart and love of his life, Joan, ran away to Centerville, Mississippi to elope. They were truly a modern day love story. Jason worked his whole life – starting with Parks & Recreation, a gas station, and eye glass manufacturer, and a cement plant before landing at Ford’s Theatrical Lighting where he met the other love of his life, Holiday on Ice. He traveled the world with Holiday on Ice for years. He was a jack-of-all-trades. If it was possible for something to be fixed – he could fix it. He was a electrician, truck driver, wood worker, welder, set builder, ice engineer, cook, show company manager, carnie, fixer of every toy, and a true family man. He was survived by his wife, Joan Fendlason; his daughter and her husband, Chantal and Robert Hudson; his grandchildren & their spouses Rikki & Cole Permenter, Kirbi & Hunter Travis, and Trey & Laura Hudson; and his great grandchildren Hudson Permenter, Magnolia Permenter, Ella Travis, Elliot Travis, Evelyn Travis, and AJ Hudson. He spoke openly and often about how blessed and lucky he was to have such a beautiful family and greeted them each with a “squeeze and a hug”. He was also survived by the most spoiled dog ever and his constant companion Penelope J. Fendlason (Penny). He was preceded in death by his son, Andre Evan Fendlason. Pallbearers will be Robert Hudson, Robert Hegwood, Matthew Hegwood, Cole Permenter, Hunter Travis, Trey Hudson and Kevin Dunn. Honorary pallbearers will be Charles Dupont, Aidan Hudson, Elliot Travis and George Dunn. Visitation will be at First Baptist Church in Zachary on Friday, Feb. 19, 2021 from 9am until service time at 11am conducted by Rev. Cole Permenter and Dr. Wayne Barnes. Burial will be at Azalea Rest Cemetery, Zachary. Memorial donations may be made to https://www.whiteoakwildlife.org/support-white-oak.
Read Less

To send flowers to the family or plant a tree in memory of Jason Daniel Fendlason III, please visit our Heartfelt Sympathies Store.

We encourage you to share your most beloved memories of Jason here, so that the family and other loved ones can always see it. You can upload cherished photographs, or share your favorite stories, and can even comment on those shared by others.

Posted Feb 18, 2021 at 04:07pm
Our poor health will keep us from being at your side for this last visit but our hearts will carry a lifetime of memories until we meet again. Love,

3 trees were planted in the memory of Jason Fendlason

Posted Feb 17, 2021 at 08:02pm
It is not easy to lose old friends and Mary and I are saddened to hear of Jason’s passing. We have known Jason and Joan for more than 50 years and feel the best years of our lifes we’re spent on the road with them and Chantal and Andre.We send our love you and cherish the memory of all our wonderful times together. Tommy
Comment Share
Share via:
EP

Posted Feb 17, 2021 at 02:47pm
Please accept our most heartfelt sympathies for your loss... Our thoughts are with you and your family during this difficult time.

Eddie and Melissa Permenter purchased the The FTD Living Spirit Dishgarden for the family of Jason Fendlason. Send Flowers

Posted Feb 17, 2021 at 12:31pm
Our thoughts and prayers are with you. We will always remember Jason and the kindness he gave to Valerie and Kevin throughout their wedding. 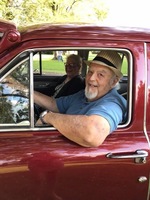