To share your memory on the wall of Mildred Pierce, sign in using one of the following options:

To send flowers to the family or plant a tree in memory of Mildred Seal Pierce, please visit our Heartfelt Sympathies Store.

We encourage you to share your most beloved memories of Mildred here, so that the family and other loved ones can always see it. You can upload cherished photographs, or share your favorite stories, and can even comment on those shared by others.

Posted Dec 14, 2019 at 07:53pm
Sorry to hear about Mildred.She and I live about a quarter mile from each other and went to school together. Our prayers or with the family and we pray that Wilton will be located. GOD BLESS Jerry 0 Tullos


I am sorry to hear about Mildred.She and I was raised up together.She live about a quarter mile from Me and we went to school together and I knew Weldon just as long.Our prays are that Weldon will be located soon.Our prayers are with the family and friends
GOD BLESS

Posted Dec 13, 2019 at 09:17am
It was with great sadness that I learned of Ms. Mildred’s passing. Please accept my heartfelt condolences and I hope that in a small way they help through these trying times. I recall meeting Ms. Mildred many years ago when I worked for one of the local banks here in town. She was a really sweet lady once I got to know her, and she took her banking seriously, but at the same time I could see she also had a good sense of humor too. I enjoyed our brief conversations and many of our not so brief ones too. I wish Ms. Mildred’s family peace of mind, and that all of you be comforted by “the father of tender mercies and the the God of all comfort.” May you also receive added comfort from God’s future promises: “And the last enemy, death, is to be brought to nothing.” (1 Corinthians 15:26); “[God] will wipe out every tear from their eyes, and death will be no more, neither will mourning nor outcry nor pain be anymore.”- Revelation 21:4

Posted Dec 12, 2019 at 07:53pm
So sorry for the loss of your Mom. She was a special person. Still praying for the location of Mr Wick. prayers for all the family
Comment Share
Share via:
HT 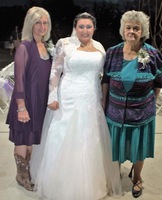