To share your memory on the wall of Rayce Hughes, sign in using one of the following options:

Provide comfort for the family of Rayce Hughes with a meaningful gesture of sympathy.

Rayce will be missed by his Mother Melanie Hughes, Grandmother Kathryn Kennedy, Brother Hadyn and his son Parker, Brother Skyler and his wife Sarah and sons Ashton, Carson, and Weston, his dog Quest and many great friends. We know Rayce is now with his Father Scott Hughes, Grandfather Ray Kennedy, Grandparents Don and Gloria Hughes and was dearly loved here on earth as well as in heaven.

Rayce was born August 21, 1982 in Ogden, UT and grew up in Spring, TX where he attended Klein schools. During his younger years he focused on sports and music. He played football and baseball. His love for music was displayed by his talents in guitar playing and singing. In high school you could always catch Rayce humming a Dave Mathews Band song. Rayce attended Texas State University and spent most of his time after college in San Marcos and San Antonio.

Rayce had a career in the restaurant industry. He had a passion for food and leading people and enjoyed working for the many Landry’s restaurant chains. One of Rayce’s greatest accomplishments was working his way up to General Manager and having his name on the front door of a San Antonio Riverwalk restaurant.

Rayce recently moved to Louisiana with his brother Hadyn and enjoyed quality time with his brother and his nephew Parker. Rayce enjoyed the companionship of the rescue dogs he had over the years, Quest, Bandit and Canyon. He spent his free time running, watching scary movies, keeping up with politics, watching the Astros, being a crazy and fun uncle and perfecting his Australian accent. He always made us laugh and was a dear friend to so many.

Rayce accepted Jesus early on in his life, but displayed his love and devotion for Christ when he was baptized earlier this year. We LOVE and MISS you so much our son and sweet brother.
Read Less

We encourage you to share your most beloved memories of Rayce here, so that the family and other loved ones can always see it. You can upload cherished photographs, or share your favorite stories, and can even comment on those shared by others.

Posted Oct 08, 2019 at 10:47am
Your Insperity IT family sends you so much love and strength. Thinking of you during this time. Peace and Light, Insperity IT Dept.

Flowers were purchased for the family of Rayce Hughes. Send Flowers 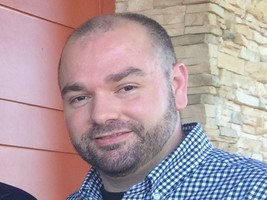