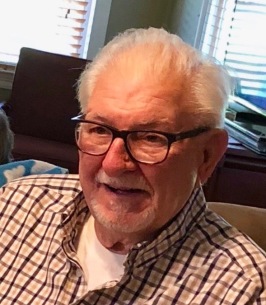 Print
Donald Paul Thoms Sr., 84 Of Jackson LA passed away Wednesday, Oct. 31, 2018. Donald was a veteran, he served his country in United States Navy during the Korean Conflict. He was retired from DSM Copolymer after 44 years of service. He was a member of St. John the Baptist Catholic Church and graduated from Baker High School. He was a loving and devoted husband, father, grandfather, great-grandfather, brother and friend and will be missed dearly by all. Visitation will be held at Charlet Funeral Home​ Inc., ​ in Zachary, La.; on​ Monday, November 5, 2018 from 5:00 pm until 8:00 pm with a 7:00 pm rosary. Visitation will continue on Tuesday, November 6, 2018 at St John the Baptist Catholic Church​ from 10:00 am until Mass at 11:00 am conducted by FR. Lamar Partin​. Burial will follow at Hillcrest Memorial Cemetery in Baker. He is survived by his wife of 25 years Anita Minor Thoms of Jackson, La; two sons and daughters-in-law Paul and Tara Thoms Jr of Central, La; Mark and Tammy Thoms of Denham Springs, La; daughter and son-in-law Jennifer and Kevin LeBlanc of Erwinville, La; two step-sons and daughters-in-law Bruce and Stacie Minor of Jackson, La; Byron and Charlotte Minor of Ethel, La; two step daughters and sons-in-law Sandra and John Cobb of Zachary, La; Mary and Dennis Debate of Baton Rouge, La; one brother and sister-in-law Norman and Ceil Thoms of Baton Rouge, La; 14 grandchildren and 16 great grandchildren. He was preceded in death by his first wife of 34 years Emilie “Butch” Thoms, parents Ventress Earl and Mary Ada Thoms, brothers Ventress Earl Thoms Jr., Henry Thoms, Dewey Thoms,; sisters Louise Talbot, Mary Godbold, Emily Landry,; one step grandson Jeff Debate and one great granddaughter Bradlee Dickerson. Pallbearers will be Buddy Cormier, JT Davis, Timmy Davis, Micah Ivy, Blake Laiche, Quentin Thoms, Bruce Minor, John Cobb. ​In lieu of flowers, please make memorial donations to St. John the Baptist Catholic Church or The Carpenter House. ​

We encourage you to share any memorable photos or stories about Donald. All tributes placed on and purchased through this memorial website will remain on in perpetuity for future generations.

With my deepest sympathy.
Robbie Cleere - Monday November 05, 2018 via Heartfelt Sympathies | Order flowers in memory of Donald
Share This:

RD
To The Thoms family : Please know that we are lifting you up in prayer in this
Time of your tremendous bereavement. We sincerely love you , and know that God loves you more , He is in the midst and is there to comfort you . You have so many beautiful memories to cherish and your love one is in a better place. Truly earth has no sorrow that Heaven cannot heal. God’s bless you and keep each of you in His ever loving care.
Robert E Douglas - Thursday November 01, 2018 via Condolence Message
Share This:
1
Page 1 of 1
Share
×

Thank you for sharing!

Or use your email:

Connect with families at their time of loss. By subscribing to email updates, you will receive two daily updates containing all new stories, photos, candle lightings, condolences, and more.